The dishes include the likes of Split Pea and Ham Soup, Potted Brown Shrimps, Twice-baked Lancashire Bomb Cheese Soufflé and Crab Macaroni Cheese amongst the starters; Beef Wellington, Whole Dover Sole and Steamed Beef Shin, Oxtail and Kidney Pudding as stand-out mains, and desserts such as Rhubarb Trifle, Steamed Pudding and Custard, and Baked Alaska are sure to delight. 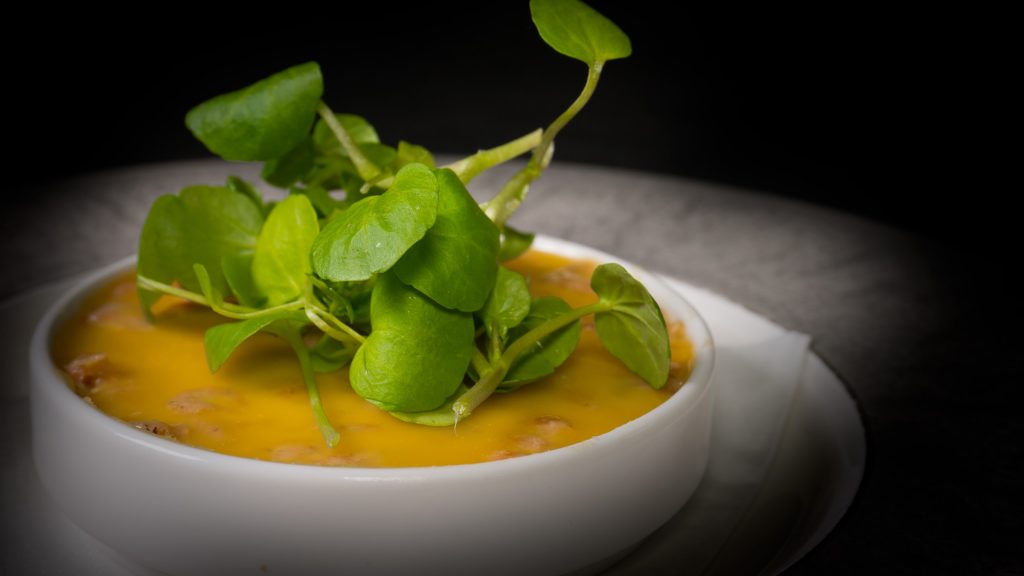 It’s the sort of menu over which business deals were done in the Savoy Grill and political stitch-ups struck in the gentlemen’s clubs of Belgravia during l-o-n-g lunches and sophisticated dinners of yore.

The change in direction suggests that the two-AA Rosette River Restaurant and Bar, overlooking Santiago Calatrava’s elegant bridge, intends to restore its reputation as a must-visit dining destination and provide a contrast to the casualisation evident in other Manchester hotel restaurants.

Executive Chef Andrew Green, using premium ingredients and local suppliers, has taken traditional dishes and updated them; a demonstration that the highly experienced chef from Glossop is really hitting his stride.

“You could argue that the city is now passing the craze for small plates, and diners are craving a return to a slightly more organised approach and one which makes them feel special. We have adopted a traditional approach for the new menu, complete with a series of modern twists, so diners can enjoy refined cooking in an enjoyable and informal setting. We believe certain dishes, such as the Dover Sole, are only available here in the whole of Greater Manchester, and we’re looking forward to welcoming both those patrons who know and love what we do and diners seeking a special eating out experience.” – Andrew Green

There’s a nostalgic treat in store for diners old enough to remember when chefs produced dishes you wanted to eat rather than look at. Eating should be a sensual experience, not a cerebral one. These dishes are, in short, baby boomers’ culinary gifts to millennials. I just hope they’ll be suitably grateful.

At the menu’s media launch, the Pea and Ham Soup, Crab Macaroni Cheese and Potted Brown Shrimps (with their sea-salty tang, traditionally set in rich shrimp butter) boasted top notch ingredients and were allowed full rein to express their flavours.

The Beef Wellington, a perfectly medium-rare fillet – wrapped in mushroom duxelles and Parma ham, then baked in crisp puff pastry – was superb and timed to the second. Served with Madeira sauce, it’s one of a number of dishes on the menu to share between two and brought to the table and showcased by the chef before being sliced.

The Meunière-style Whole Dover Sole, one of the finest of flatfish, can be served on or off the bone and other fish options, rarely seen these days on restaurant menus, included Scottish Halibut Fillet and a show-stopping Traditional Fish Pie.

The Best of British selection of desserts yielded Steamed Treacle Sponge, packed with dried fruits and spiced with orange zest and nutmeg, and which takes an hour to be steamed. Don’t forget to order it early along with the other courses.

You could really taste the love. 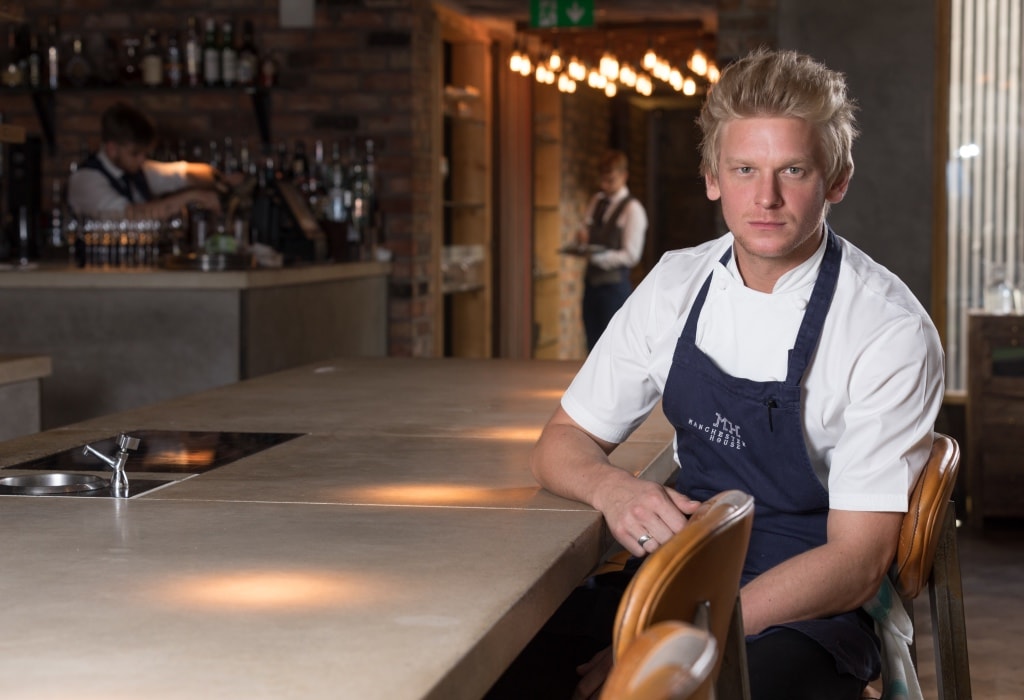 NAT TOFAN AT MANCHESTER HOUSE – UP THERE WITH THE STARS

In a contrived three-part television documentary made by the BBC in 2014 called Restaurant Wars – The Battle for Manchester, Aiden Byrne at Manchester House was pitched against Simon Rogan at The French in a supposed race to win a Michelin star. Neither did so and both chefs have since departed from their respective kitchens.

But, in doing so, they made way for two of the country’s most exciting talented young culinary guns to be promoted from the ranks.

At the French, Adam Reid took over as head chef at the age of 30. And now Nat Tofan – part of the Manchester House project from the very start – has taken charge, aged just 27. Winning a Michelin star has never depended on having already won one somewhere else.

Ever since the late Living Ventures boss Tim Bacon realised his ambition to open a flagship city centre Michelin-contending restaurant, star chef Aiden has been virtually synonymous with Manchester House.

But last September, Aiden (the youngest chef ever to win a Michelin star, when he was 22) announced his departure and his protégé and first lieutenant Nat Tofan stepped up to the plate in a seamless transition.

Now Manchester House has burst into 2018 with a new set of menus and its ‘new’ head chef’s name up in lights. And rightly so, for at the press preview of what lies ahead at Manchester House, there’s plenty of evidence that a precocious culinary talent has been given his head.

Born and raised in Nottingham, Nat found his passion through working in his parents’ restaurant and at the age of 18 embarked on a career as a chef. He learned the basics as an apprentice chef before joining the brigade at one of Nottingham’s leading restaurants.

A year in Paris followed, where Nat continued to build his culinary foundations and in 2011, he moved to Manchester and was a key part of the launch of Australasia, Living Ventures’ high-energy Pan-Asian fine dining restaurant. He worked alongside Aiden Byrne in the development kitchen for six months before launching Manchester House; Nat as a key lieutenant to Aiden in the team. After taking a short sabbatical in 2015, to experience new cultures and flavours, Nat returned to Manchester House as senior sous chef and in September 2017 was appointed head chef.

The new menus offer two or three-course lunches, priced competitively at £24.50 and £29.50 respectively, and a seasonal menu featuring starters for £15, mains from £35 and desserts for £8. Additionally, there’s a spectacular afternoon tea of five savoury and six sweet delicacies for £25 (or £40 with a cocktail flight) and the restaurant’s legendary tasting menus. 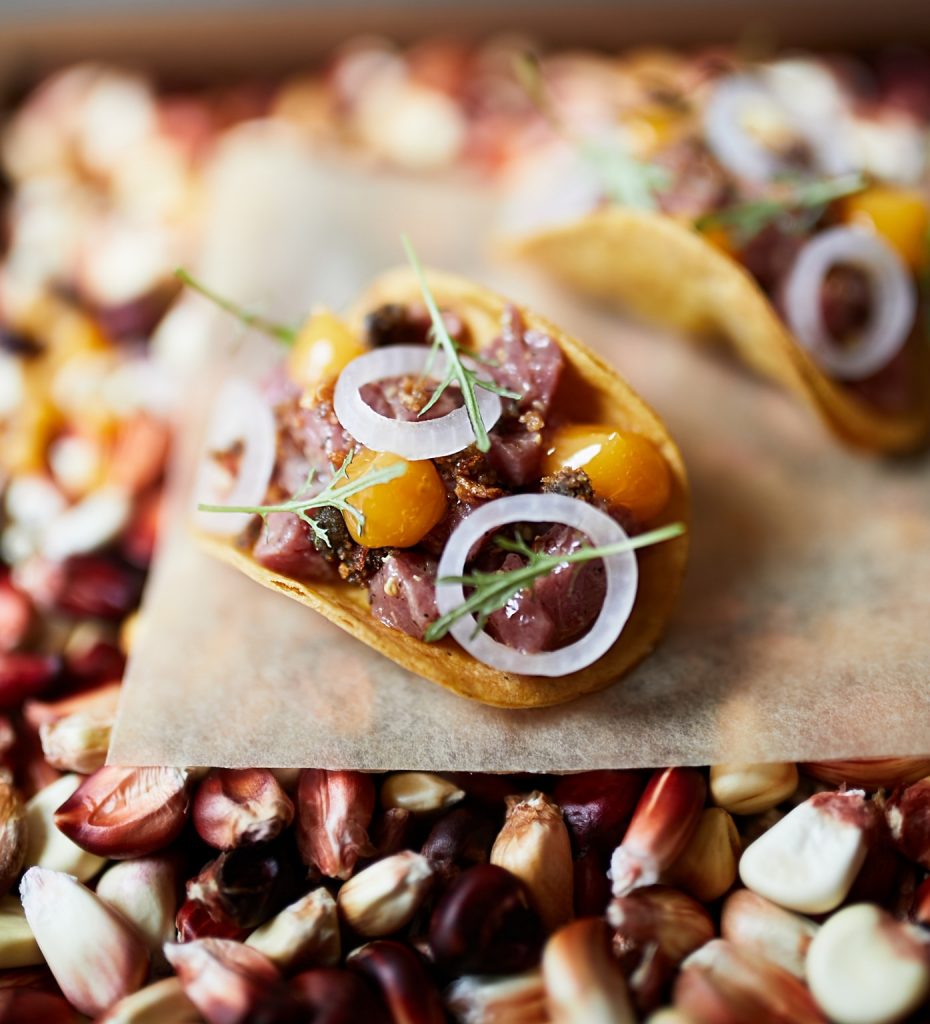 The tasting menus come either as eight courses for £75 or 12 courses for £95 (vegetarian versions command the same prices), with specially selected wine flights adding £45/£75. It was tasters from these that demonstrated Nat’s skilled direction of the army of chefs in Manchester House’s huge open theatre kitchen, which is almost as big as the dining area itself.

Even the bread and butter – sublime crusty sourdough with beurre noisette and crushed shards of crispy chicken skin – was a work of art and the ‘chef’s snacks’ were simply brilliant. The Millionaire’s Sandwich – layers of foie gras and pistachio – was an exquisite piece of culinary craftsmanship, while Raw Beef with Coal Oil – a clever cheffy trick to introduce barbecue flavours to meat that’s never been anywhere near a grill – was served on a mini taco with gloriously gooey egg yolks… superb. 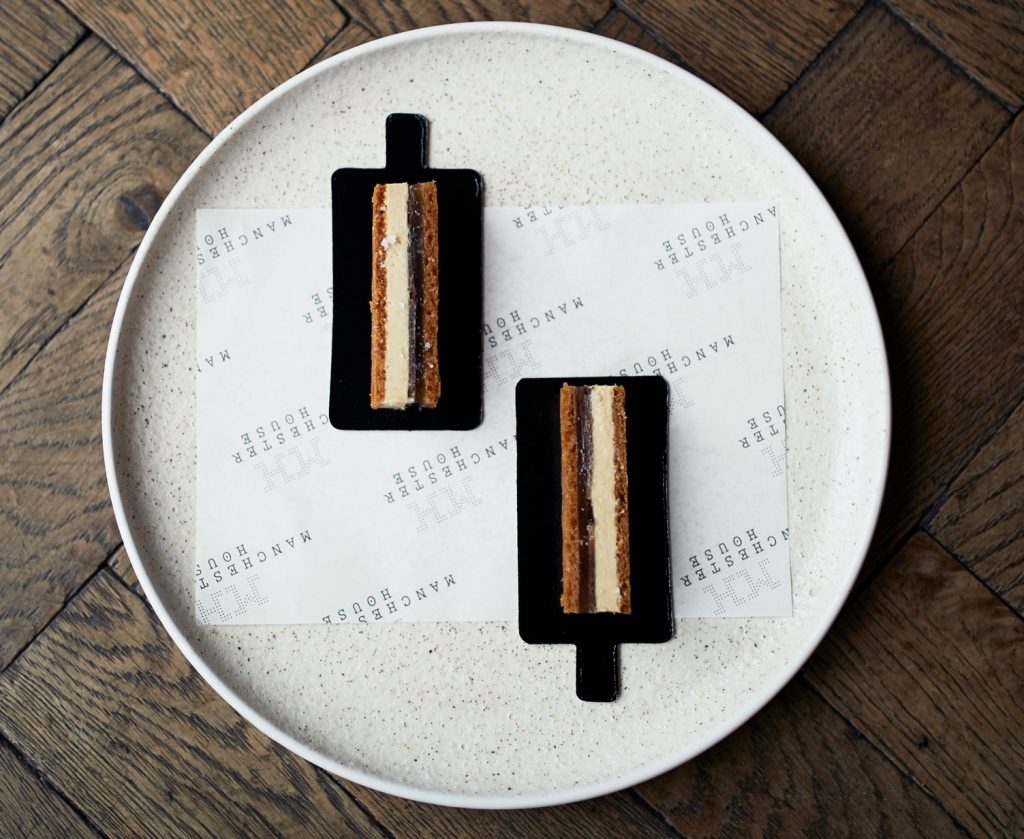 Intriguingly, the last time we’d encountered beef in coal oil was as a course on Simon Rogan’s tasting menu at The French – there must be a truce in the restaurant war!

Our taster of the tasting menu continued with that most regal of fish, turbot. It was perfectly cooked, studded with slivers of razor clam and served with rare, delicately flavoured white soy and tangy verjus.

Dessert produced another piece of culinary magic – a stunning coral-orange Mousse of Sea Buckthorn, smooth and sweet without being cloying and counterpointed by a scoop of lemon yogurt.

The wine flight brought forth some serious stuff, brilliantly matched to each course, hence: Bordeaux blanc from Château Picque Caillou; Puligny Montrachet, a white Burgundy, intriguingly, with the beef; the Loire’s finest Pouilly Fumé with the turbot; and a top-class German Rieslaner Auslese with dessert.