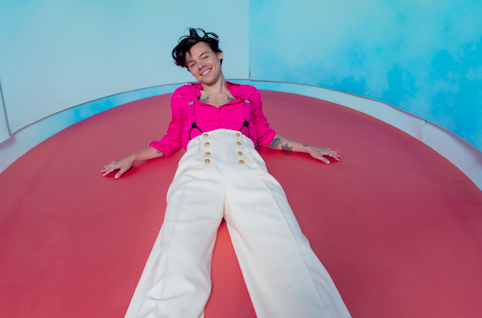 Multi-platinum recording artist Harry Styles announces the rescheduled dates for his world tour, in addition to new shows added across the globe.

Styles will kick off his colossal 32-city outing with three brand new stadium dates in the U.K. in June, and a further four stadiums in Europe including a brand new show at Glasgow Ibrox Stadium, Manchester Emirates Old Trafford and London Wembley Stadium through June.  The tour will continue in July with rescheduled arena dates in Europe, as well as a new show at Accor Arena in Paris, before concluding in Latin America later this year. All existing tickets for rescheduled shows will remain valid. Tickets for the new shows go on general sale 9am on Friday 28 January at LiveNation.co.uk. Tickets are also available at gigsandtours.com and ticketmaster.co.uk.

Special guests include Mitski on the UK dates, Arlo Parks in Dublin, Wolf Alice on select European dates and Koffee across all Latin American dates.

Ticket holders for the 2020 UK Arena tour dates *will be refunded* and receive an exclusive access presale to ensure priority access to the new performance at Glasgow Ibrox Stadium, Manchester Emirates Old Trafford and London Wembley Stadium. Ticket holders will be contacted by their ticket agent with details.

Harry Styles has established himself as one of the biggest and most influential artists in music. His self-titled debut solo album became one of the world’s top-ten best selling albums of the year and had the biggest first week of sales by a male artist in history. His second album, Fine Line, topped the Billboard 200 when it was released, making it Harry’s second US Number One album and made chart history providing the biggest sales week for a solo UK male artist since Nielsen Music began electronically trading sales data in 1991. Since launching his solo career, he has gained prestigious accolades including, two BRIT awards, a Grammy award, an Ivor Novello Award an American Music Award and many others across the world, in addition to being the first man to appear solo on the cover of Vogue Magazine.

Harry is equally renowned as an incredible live performer. His Love On Tour shows were postponed due to the pandemic and finally started in September 2021 in Las Vegas. Harry performed over 40 shows throughout the US at the end of last year winning praise from fans and critics alike.  His shows are packed with his global hit singles including Sign of the Times, Lights Up, Adore You, Watermelon Sugar and Kiwi.

TICKETS: Tickets go on sale for Harry Styles’ Love On Tour 2022 9am on Friday 28 January at LiveNation.co.uk.  Tickets are also available at gigsandtours.com and ticketmaster.co.uk.

The tour will be following all local and public health guidelines as well as venue protocols set forth at the time of each show. Fans are encouraged to visit their local venue’s website ahead of each show for the latest health & safety details and requirements for their date.