IN CONVERSATION WITH COMEDIAN OMID DJALILI 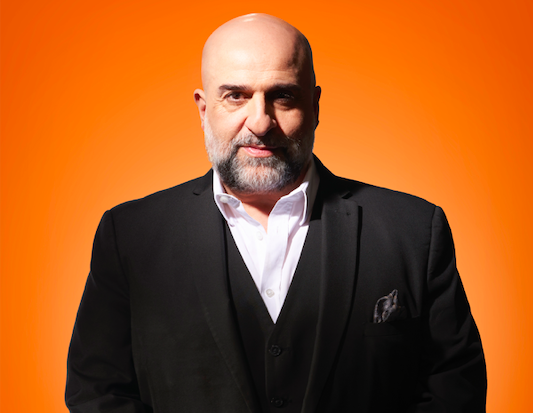 IN CONVERSATION WITH COMEDIAN OMID DJALILI

We chat to Iranian British comedian Omid Djalili, about his The Good Times Tour

How would you sum up the new show?

It’s difficult to answer that because I have a few surprises up my sleeve. But the main thrust of it is that it’s a celebration of stand-up comedy, and the joy of coming together as a way of catching up on fun we’ve missed out on. I remember having a conversation with one of the producers of the Royal Variety Performance who said more often than not he found someone on stage all by themselves doing stand up comedy more powerful and magical than a highly entertaining musical number with 60 people dancing around on stage. A stand-up can conjure up 1,000 images because your mind is working while you’re listening. So basically my new show is a thousand images in an hour and a half.

You did a few gigs earlier in the year before heading back on the road in September. How was it being back in front of live audiences?

The new normal, as we call it, is extraordinary. The last gig I did was at a beer garden in Colchester. I was only a mile away but because of a road closure I had to go 20 miles around. I was an hour late. When I got there, there was nowhere to park. They told me to park in a car park 500 yards away and I said ‘I haven’t got time for that” so they said “ok just come in with the car”. I drove right onto the stage, parked, got out, walked to the centre of the stage, they passed me a microphone, I spoke for 40 minutes, we laughed, I got back in the car and left. I was wearing a suit too so I looked like some Hollywood big shot (or even worse, someone who thinks they’re a Hollywood big shot) coming on, talking for a bit, then buggering off.

How have the other gigs gone?

One of the first gigs I did back was a socially-distanced one in Newcastle, at The Stand Comedy Club, in a 300-seat venue where only 90 people were allowed in and they all had to wear visors and they weren’t allowed to speak to me. Halfway through the show I said ‘Look, if you really want to heckle, why don’t you steam up the inside of your visors and write your heckles backwards?’ I quickly lost control of the gig because they weren’t interested in what I was saying any more, they were only interested in writing words backwards. So it’s a real relief to be back on stage with an audience without restrictions.

Every comic I’ve spoken to has come to the realisation that this is a profession you can never take for granted because we have the best job in the world. I did Zoom gigs and enjoyed them but you can’t beat the live experience. It impacts you physiologically. When you have a shared experience it has an affect on the mind, body and spirit in a way that is very different to watching things digitally on your phone or on a television. It’s certainly impacted me when I’ve seen it done well.

Many people mastered new skills when the pandemic struck. How about you?

Yes, the Persian language. At least I tried. I was asked to be a guest on a Persian-language talk show recorded in London and broadcast from the Middle East. I’d been asked to do it for many years and always said no, but then when they approached me again during lockdown I thought ‘why not? And it might be fun to pick up a new skill.’ So I brushed up on my Persian, did it and got myself acquainted with a whole new audience. And then they asked me to guest host an episode. The process of delving into my culture in the language of my heritage but with the brain of a stand-up comedian, finding the nuance and turns of phrase in the language, was challenging and exciting. It’s hard enough doing that in English, but to do it in your second language was a thrill. Now there’s an offer to do my own show, which is nothing short of extraordinary. To have my own Persian-language talk show on BBC Persia, beamed directly into Iran, with a potential global audience of 30-40 million is quite a result after doing something essentially just for the hell of it during lockdown.

No. I went into it kicking and screaming. There’s a saying that “you always end up doing the thing you’re second-best at” the implication being that you have to try lots of different things before you find that thing. The same team that makes The Chase was behind it too so I knew it had to be good. I’d appeared on the celebrity version of The Chase and they offered me this new format straight away in the green room. I avoided them many times but they said ‘just come and watch it, we’ll perform it for you.’ I did and I loved it and the rest is history. I’ve always had great respect for game show hosts. It’s using three or four different parts of your brain. I just didn’t think I could do it myself. It took me a while to get into it but once I understood the machinery of it I totally bought into the experience. We’ve done a second series too. If I’m honest, I can’t wait to do a third!

You’ve been in the business for more than 25 years. Did you ever imagine you’d still be going strong?

I was told early on by comedians I respected that it takes about 25 years to find your voice. You can’t just get up and be funny. I was lucky that I fell into stand-up comedy, an industry that thousands try and get into. I just did it for a laugh and if you make it through it’s like being a sperm that fertilises an egg. So why would you ever discard it? Careers are always hard to navigate but in comedy, as it is in most things, you’re never the finished article. So it’s great to be 55 years old and still know definitively there’s so much more room to grow and improve.

Well I’m always in learning mode. I like that term. If you’re in learning mode and you keep trying to learn from mistakes, you probably hit your stride about 20 years in. I still can’t watch myself though. I never saw my first Live At The Apollo. Ditto the second one. But that’s probably more to do with my shape and choice of clothes than what I was actually saying.

You must be so excited about going back on the road then?

I am. But there’s a big part of me that is prepared for the mistakes, the terrible things that go wrong on tour. And I’m looking forward to those things as well! In fact enjoying every second of it. We’ve had 18 months of no live performance so if you don’t enjoy it right now, if you don’t savour every moment, good or bad, you never will.