Meet the female DJ making a lot of noise around Manchester…

All good things come to those who wait or, in Laura Dean’s case, leave their future in the hands of fate. She’s funny, she’s honest, she spins a mean soundtrack to nights’ out and VIP occasions in the region…

Cheshire-born Laura has always been mad about music. As a teenager, she’d save up to pay the admission fee into the Haçienda, not to party but just immerse herself in her beloved house tunes.

“I bought decks and taught myself to DJ when I was about 18,” she explains, “but, back then, I lacked confidence and never saw it as a potential career.”

Instead, Laura embarked on a series of eclectic endeavours – everything from fashion design and promotional work to TV extra gigs and running her own business:

“Oh, I did a thousand things! It would take you three days to write my CV down,” she laughs in her wonderfully self-deprecating way.

Age 29, she fell in love with an Aussie guy and decamped Downunder.

“I never make plans, but I expected to work part-time and spend the rest of the time learning to surf, you know, semi-retirement in my late 20s! Instead, I ended up with two of the most responsible jobs of my entire life… at one point, I was promoted to sales director!”

Four years after leaving Manchester, her relationship having broken down and now really missing home, Laura flew back and promptly used the money she’d earned in Oz to fund a DJing course – to refine her skills – at Manchester MIDI School. 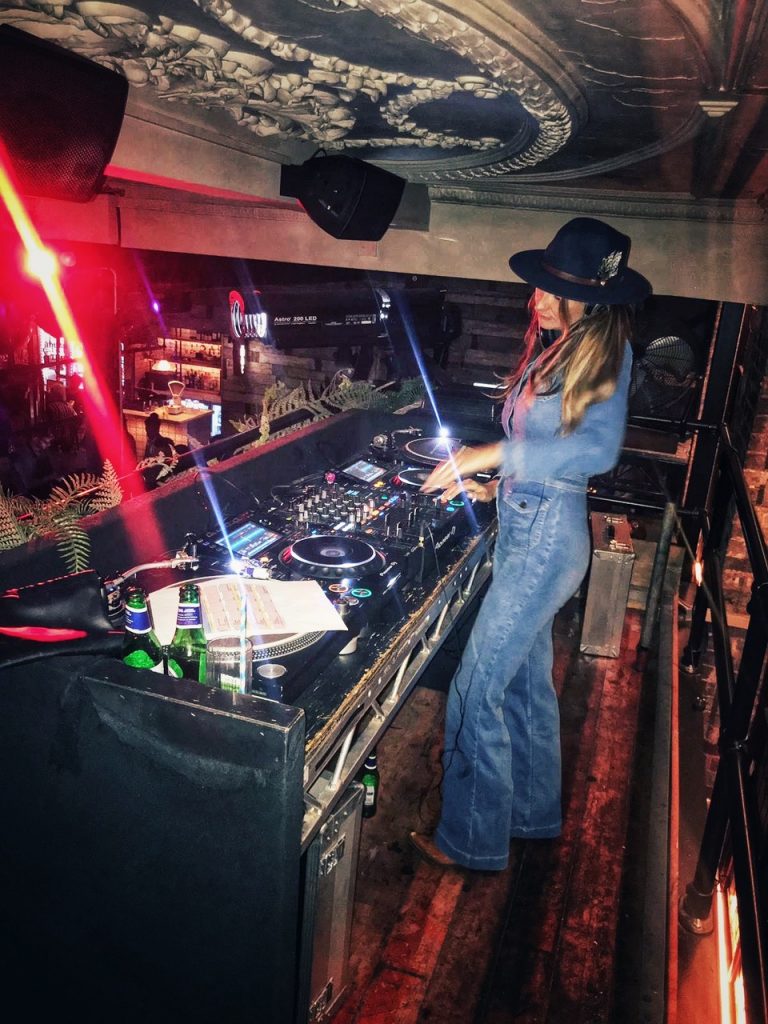 “A friend of a friend was looking for someone to DJ at Top Man in Liverpool. I said no. He asked me again. I said no. Finally, he said, ‘I’ll ask you a third time but won’t ask again’.”

Thankfully, she caved, and the gigs just kept rolling in.

Laura now holds a residency at Albert’s Didsbury and she also provides DJs for the restaurant’s other locations:

“If I see people not getting the opportunities I got, I want to help them fulfil their dreams and mentor them.”

She also works with Girls That Mix – a trio of females; one on sax, one on percussion, Laura as DJ.

“It’s SUCH fun!” she says, “This year alone, we’ve performed in Croatia on a super-yacht helipad and we’re going to Doha in a couple of weeks.”

The power of music

Laura loves shattering people’s preconceptions of what a DJ should look like:

“When I turn up at a venue, security don’t often believe I’m there to DJ!” she reveals, “And when I deliver something like a heavy techo set in a club, I love watching people look to the booth, expecting to see some big guy, and there’s me, a little woman in heels and a skirt!”

She firmly believes in the power of music; its ability to whisk you away to another world or evoke memories of another time and place:

“I was playing a mix of Aretha Franklin’s I Say a Little Prayer in Albert’s and a guy came over and told me his family were out marking the fifth anniversary of his mum’s death. The track was her favourite song. He said it really touched him and it felt like a sign.”

Now DJing for a living and enjoying the daytime downtime she spends with loved ones, Laura admits:

“For the first time in my life, it’s come together. Everything I’ve ever done is unplanned, but I trust things will pan out if I put in the hard work and passion.”

And how would she like it to pan out?