NEW HOTEL, BAR AND RESTAURANT, THE ALAN, ARRIVES IN MANCHESTER 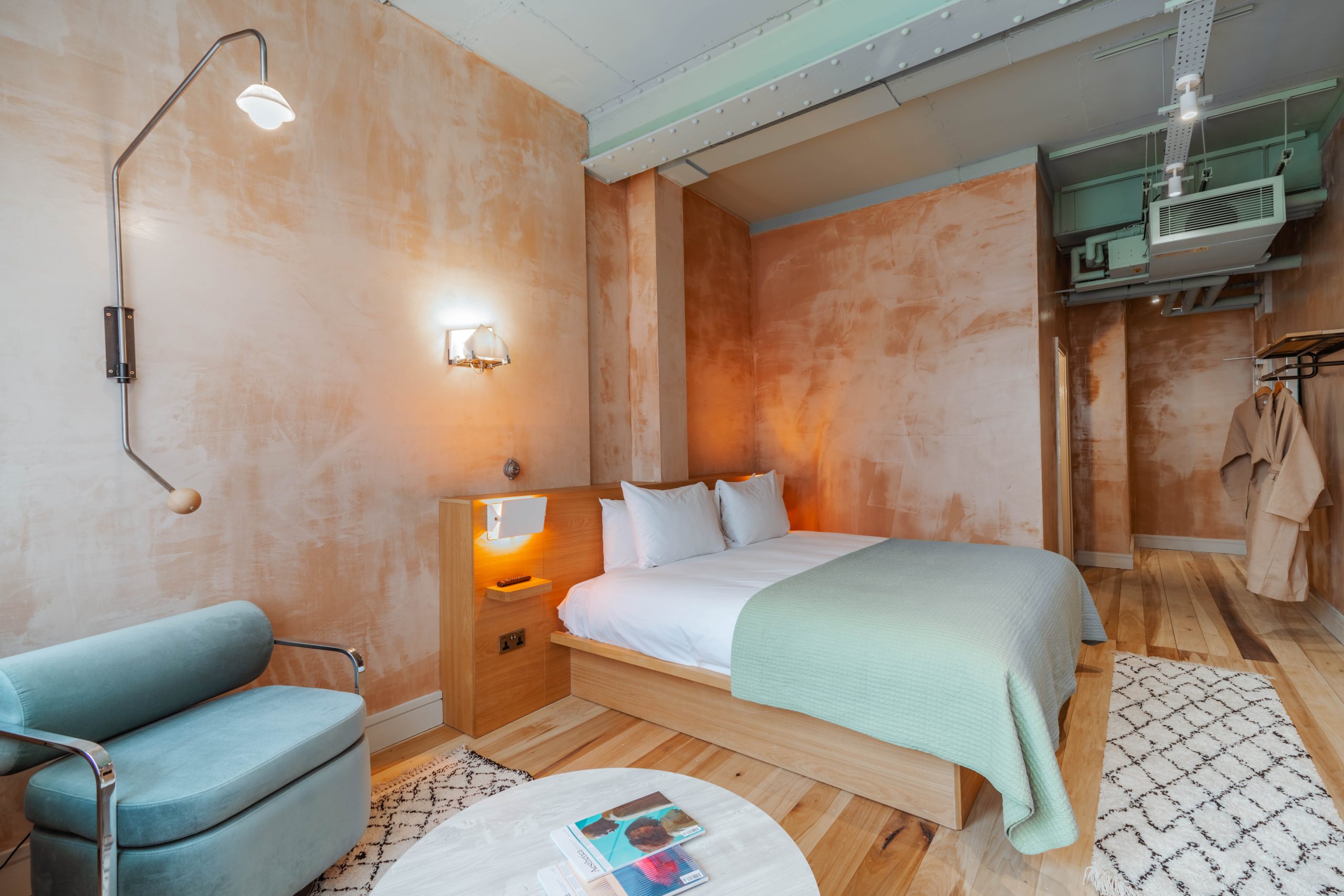 NEW HOTEL, BAR AND RESTAURANT, THE ALAN, ARRIVES IN MANCHESTER

A new design-led hotel, bar and restaurant has opened its doors on Manchester’s vibrant Princess Street. The Alan is a unique 6-storey hotel featuring 137 rooms, an open-plan kitchen, bar and pop-up event space.

Created with an emphasis on championing local makers, the space celebrates the spirit of Manchester throughout its design, produce and culture.

Art and design play a leading role at The Alan. Taking residence within an impressive Grade II listed building in the heart of the city centre, the industrial-chic interiors pay homage to the building’s rich heritage and have been carefully curated to uncover the hidden beauty of the building’s past. Many of the building’s existing materials and features have been carefully refreshed to create new focal points – from the stunning lobby floor made from a collage of fragmented and discarded marble pieces to the exposed brick walls and double height ceilings found throughout. Led by interior design agency Red Deer, the aim of the project is to counter-act the wastefulness of the construction industry, creating intriguing touchpoints that celebrate the inherent value found in old materials that may be classed by some as ‘defective’ or ‘broken’. When viewed individually, these materials seem to be useless, but make sense in the space when they flow together as one. This theme subtly refers to how as people we are made up of a collage of personal stories – some good and some bad, but all playing a part in who we are.

The hotel’s 137 rooms range from The Standard, generously sized yet intimate rooms featuring high ceilings and warm textures; The Midi, bigger spaces ideal for both work and play; The Master, larger rooms with lounging areas perfect for longer stays; and the inimitable Alan Suite – impressive corner suites offering unrivalled city views and an abundance of natural light throughout the day. The building’s original guest rooms were large but lacking in many of their original proportions due to having lowered ceilings, large amounts of boxing in and cluttered with furniture. These have since been opened up to expose their original history, with a particular focus on heritage features such as historic brickwork, pitted stonework and the true tall proportions of the room. 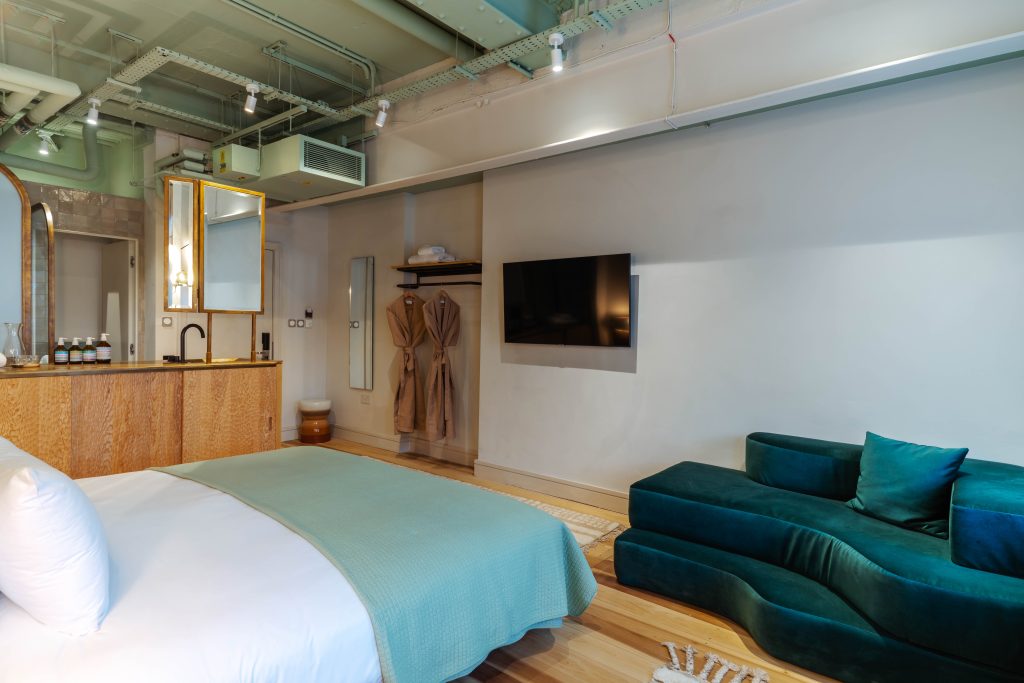 All rooms feature Emperor sized beds dressed in luxurious 200 thread count Egyptian cotton, 50” Samsung Smart TVs with Google Chromecast and pay-per-view movies, superfast Wi-Fi and Audio Pro Bluetooth speakers. The tech-forward hotel is also one of only four in the UK to offer Google Nest smart concierge in all its rooms, making guest comfort and convenience more seamless than ever. In the rooms, guests can enjoy locally roasted coffee from Ancoats Coffee Co (an acclaimed coffee roaster situated in nearby Ancoats, a neighbourhood recently named as one of the top 20 coolest in the world), specially selected tea by Bohea Teas, magazines by Yuck! and Aesthetica, rainfall showers with 100% organic Haeckel’s natural skin care products and bathrobes and slippers on request.

The opening of The Alan also brings with it a new restaurant and bar to the area – featuring an all-day, seasonal menu of dishes and drinks designed to share, created using local suppliers. While in the bedrooms emphasis is placed on creating a sense of zen and calm, the restaurant and bar spaces retain the fun and energy for which this part of Manchester is so well known. Diners are welcome from morning right through to the small hours, whether it’s breakfast or coffee, a light lunch, dinner with a view of the open kitchen or wine and cocktails in the bar – The Alan has a space for everyone. 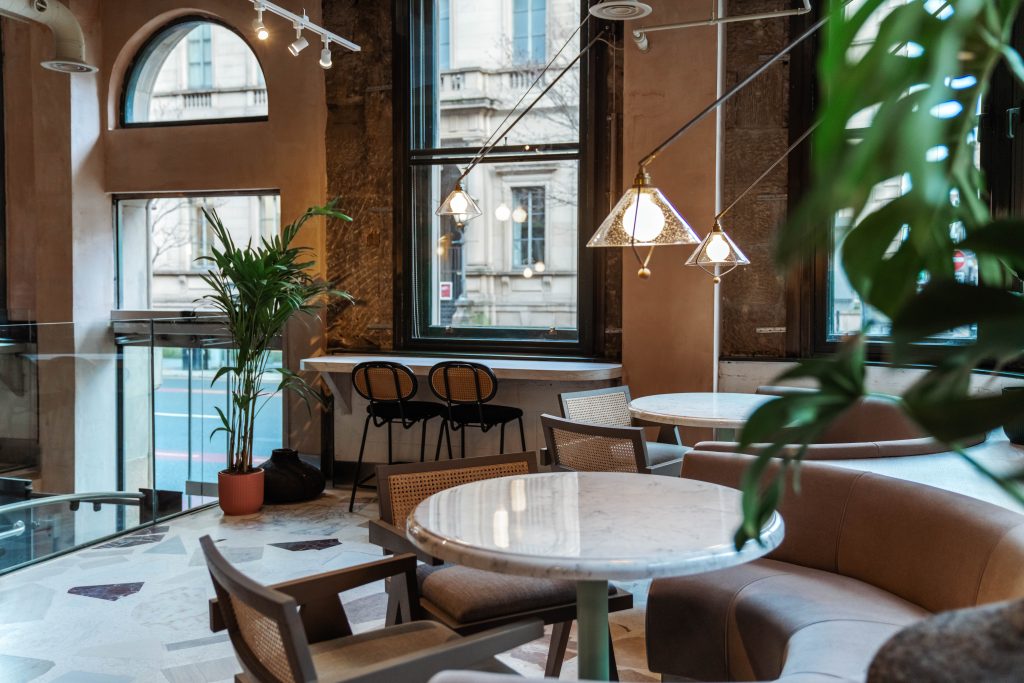 Heading up the kitchen is Iain Thomas, whose previous experience includes stints at Northern Quarter’s Edinburgh Castle and Establishment in Manchester, where he trained under renowned chef David Aspin. Iain has been working in kitchens since he was 16 and brings with him a love of seasonal cooking and a passion for locally grown produce – with items from his very own allotment even making guest appearances on the menu. The provenance of ingredients is hugely important to Iain and the menu at The Alan reflects this, with dishes made from the highest quality ingredients from local producers and suppliers. New dishes, new ideas, that are accessible and not scary or pretentious.

On the all-day menu, guests can mix and match from an assortment of indulgent small plates such as Cheshire Beef– a beef tartare, confit egg yolk with sourdough; Salt Baked Celeriac – a salt baked celeriac elevated with truffle and sherry vinegar, and the Lamb Fat Cabbage – hispi cabbage with braised lamb shoulder and rosemary. Small plates sit alongside a selection of larger showstoppers from The Butcher’s Quarter, an artisanal butcher in Manchester’s buzzy Northern Quarter. Dishes and cuts will rotate regularly, and guests can expect big hitters such as Cheshire grass fed sirloin steak, Packington free range pork and Gatehouse Farm lamb chops.

Over in the bar, producers include Manchester craft breweries Pomona Island and Cloudwater Brew Co, as well as a selection of independent winemakers and distilleries – such as local gin purveyors, Ancoats Distillery. The bar aims to shake up new takes on classic serves too – with a regularly changing menu of innovative and balanced drinks, whilst stocking all the essentials for any classic cocktail.

Nestled in the heart of the city, just a short walk from both Piccadilly and Victoria railway stations, The Alan is set to be the perfect location for travellers exploring the city and locals alike. Later this year, the hotel will introduce Situ, a pop-up events space housed in the lower ground floor.  A full calendar of events and collaborations will be announced in due course.

The Alan is now open at 18 Princess St, Manchester M1 4LG. Bookings can be made online here.