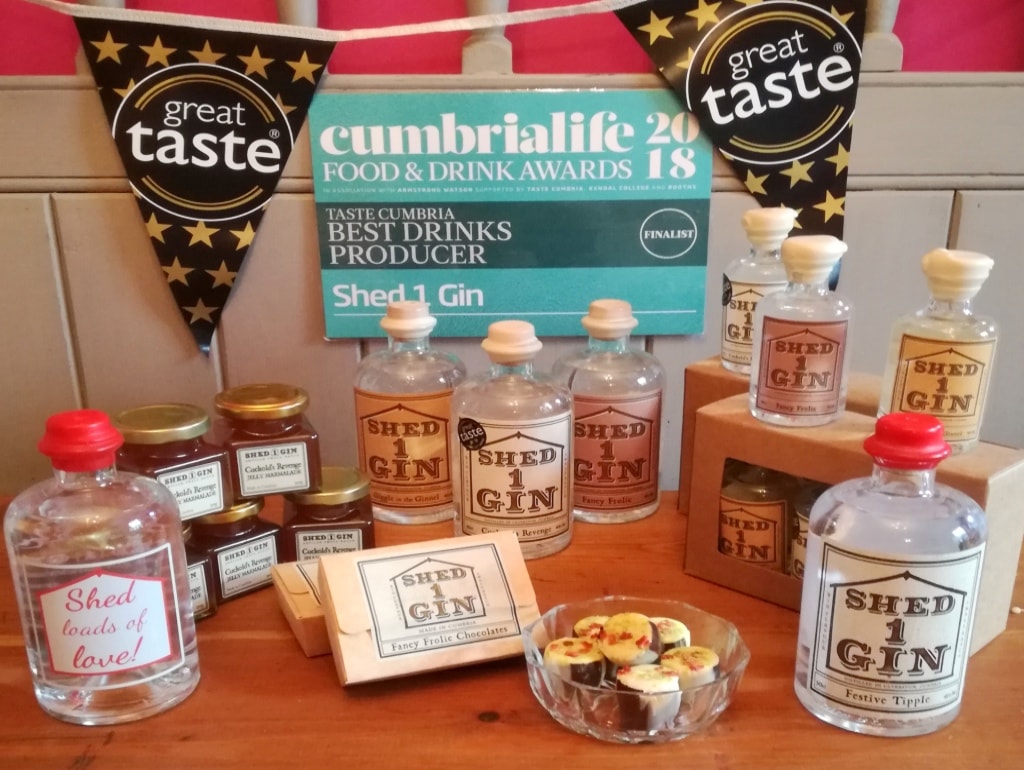 One of the UK’s smallest gin distilleries has scooped its second national award, just ahead of its second birthday. Shed 1 Distillery operates out of Andy & Zoe Arnold-Bennett’s seven square-foot garden shed on the outskirts of the Lake District, and less than two years after breaking onto the food and drink scene with its first gins, it already supplies to independent specialist retailers, bars, hotels and Michelin-starred restaurants.

It has now won its second Great Taste Award from the Guild of Fine Food, following earlier success with a two-star (Outstanding) award for Cuckold’s Revenge in 2017. The latest award, a one-star (Simply Delicious) award is for their limited edition Shed Loads of Love gin, featuring rose petals, lavender and strawberries with a hint of chilli. Shed 1 Distillery was also a finalist in Cumbria Life’s ‘Best Drinks Producer’ category this year.

The business was set up by Andy and Zoe in October 2016, with Andy swapping a full-time acting career to follow his gin dreams. The pair create small batch, big flavoured gin using high quality botanicals and smooth, filtered, Cumbrian water.  As well as Cuckold’s Revenge and Shed Loads of Love, they produce Giggle in the Ginnel, Fancy Frolic and Festive Tipple gins.

It doesn’t stop there either, with marmalade now officially a Shed 1 product too, after Zoe’s gold-award success at the World’s Original Marmalade Awards – using the same fresh, zesty fruits which feature in its gins. Furthermore, Fancy Frolic gin chocolates are proving a big success with their customers as well.

Gearing up for the installation of a new, slightly bigger still has caused a stir of interest with gin enthusiasts and the just plain curious asking if tours are available. “No!” laughs Andy, “It would be the world’s quickest distillery tour.  I could just open the door, step back and there you go!”

Even with the growing success of Shed 1 Distillery, its gins are not available through the major supermarkets with the couple preferring the more personal touch of the independent specialist retailers and face-to-face.

“We have been given a lot of encouragement and support by the people and businesses of Cumbria and beyond and our stockists and distributors believe in our product.  Also, through food markets and shows we can meet and chat with the public and this personal touch helps makes the business what it is.” –  Andy Arnold-Bennett

Not only are the couple mindful of the gin’s local roots, but also the environment.

“We avoid plastic wherever possible and all of the materials we use are recyclable/compostable. We also encourage our customers to return the bottles by taking advantage of our bottle return scheme. For every bottle returned we give cash back to the customer and make a donation to charity.” –  Zoe Arnold-Bennett