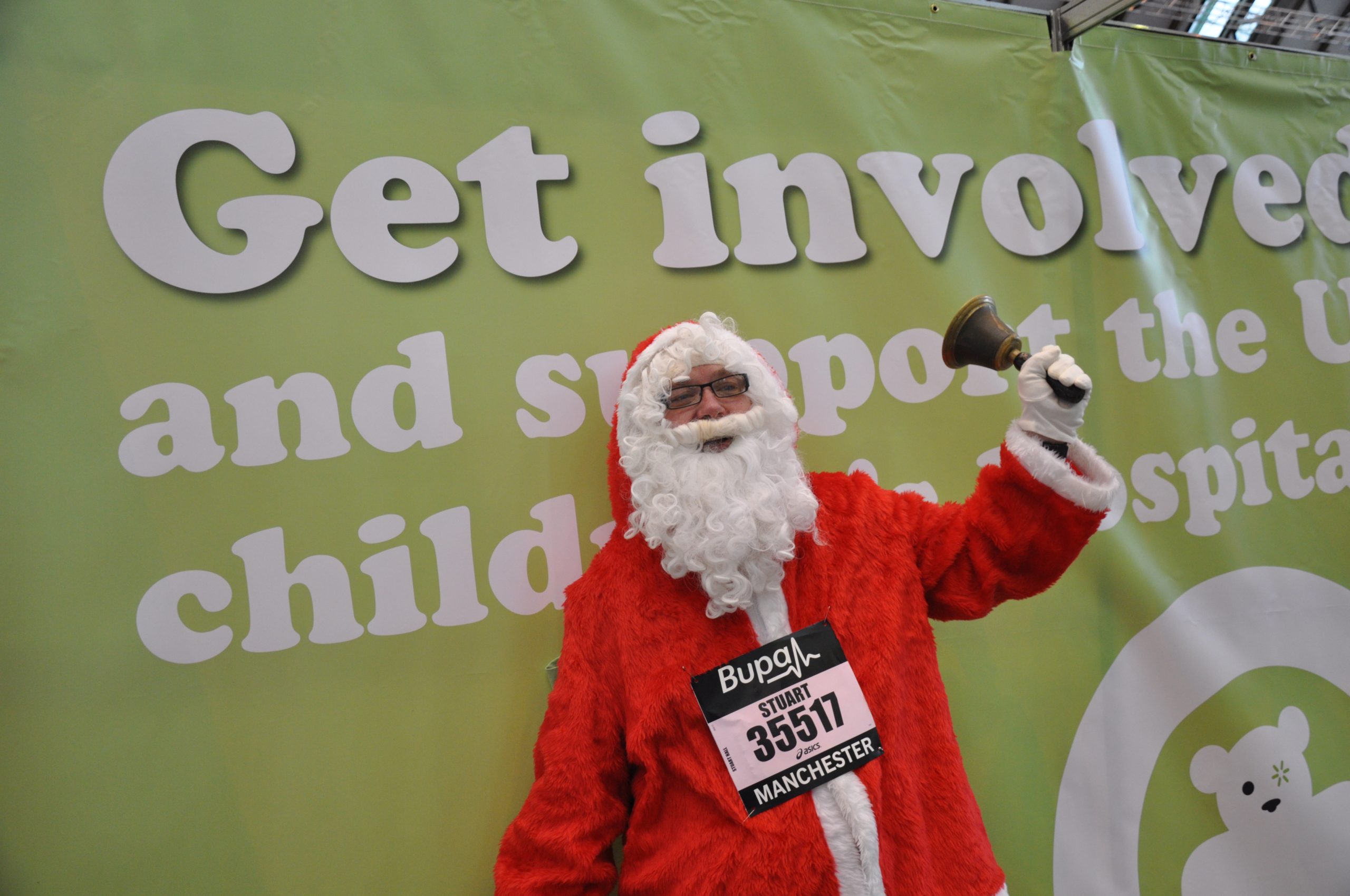 A hotdog, a Whoopee Cushion, an inflatable dinosaur and a cowboy all have one thing in common – and his name is Stuart Hall…

While the hardcore runners are checking their fitness trackers for personal bests, Stuart is happy to take things at a slower pace if it means making crowds smile along the way.

Stuart has been putting the ‘fun’ into fundraising at the Great Manchester Run 10K since 2008 and 2022 will be his 15th year running for Royal Manchester Children’s Hospital Charity. He has shared his story now to raise awareness of the charity’s Be A Good Sport campaign, which encourages supporters to do something sporty for their favourite Greater Manchester hospital.

“I just love seeing the kids’ faces light up when I run past. I actually used to be in amateur dramatics and each year we’d take our panto to the old children’s hospital at Pendlebury. I thought of them being in hospital over Christmas and that’s what gave me the idea for doing the runs in costume.

“It makes everyone laugh to see someone in a silly costume.”

Stuart, 51, lives in Salford with his wife Annemarie and their daughter Amy, 24. Proudly emphasising he lives in Salford, not Manchester, he loves the fact the 10K route takes in a lot of his favourite landmarks.

“The only one I haven’t done in costume is 2020 when the event wasn’t on due to all the Covid and Lockdown measures,” explained Stuart. “I still ran a 10K, but I just did it in normal running gear because not many people were about.

“I was quite surreal but also very nice to do a 10K around Media City.”

As Stuart is raising money for Royal Manchester Children’s Hospital Charity, he feels it’s important to keep his spending to a minimum when it comes to costumes. Surprising when you see his vast array of outfits, which also includes a gnome riding a mushroom, Father Christmas and an Oompa Loompa from the Charlie and the Chocolate Factory film.

“When I can, I try to find them second hand or on eBay,” said Stuart. “I never rent them, so I’ve kept all the costumes I’ve run in. All except Humphrey Bear, who obviously lives at the children’s hospital.”

Humphrey, the Charity’s own friendly green mascot bear, was a particular highlight in Stuart’s running career. Stuart ran the 10K as Humphrey in 2017 to mark ten years of running for the Charity.

“Running as Humphrey was a real privilege,” said Stuart. “He’s quite bulky so I had a few practices at the Heaton Park Parkrun. The worst thing is actually the visibility – you can’t really see out of the costume very well, especially as Humphrey has a poorly eye.”

“When I was the gnome sat on a mushroom a parent said ‘look it’s Father Christmas’ and her child was quick to correct her and point out I was actually a gnome. Seeing his smile was one of the things that makes it all worthwhile.”

The costumes are obviously not built for doing a 10K run in, so Stuart knows the fundraising is far more important than getting a good time. But even though he considers the uncomfortable dress-ups a small sacrifice to make for the children, there will be one costume he wouldn’t recommend to fellow costume aficionados.

“The inflatable T-Rex was the worst,” said Stuart. “Oh it was just awful. 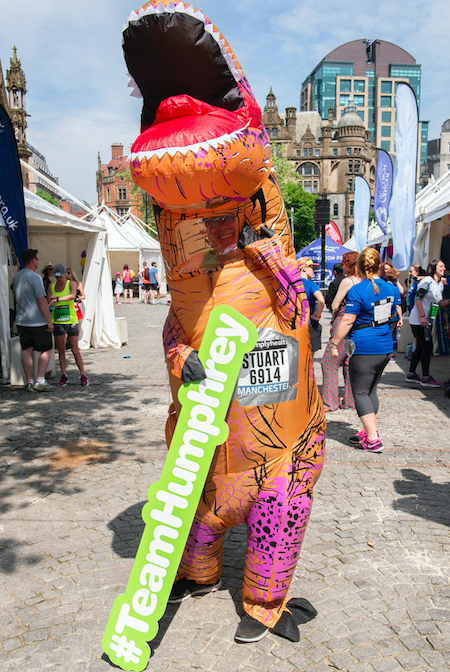 “I never practised running in it which was mistake number one. To anyone thinking of doing a run in costume – if you go with something unusual make sure you get a little half-miler in at the very least and ask yourself if it’s a good idea.

“The problem with the T-Rex is it had a fan to constantly keep it inflated which was a pain. And you only have a very small plastic window to look out of, so that kept steaming up all the time. The 10K that year was on one of the hottest days in May and according to my phone it was 26 degrees outside the costume and 32 degrees inside it!”

Stuart is now busy planning his outfit for the 2022 Great Manchester Run, which is taking place on 22nd May. Stuart, who works as a lighting designer for Whitecroft Lighting in Ashton-under-Lyne, said he’d like to find something extra special for his 15th  run for Royal Manchester Children’s Hospital Charity.

He said: “I’d love a triceratops outfit if I can. I clearly haven’t learned my lesson about dinosaurs!”

He’s also proud to be part of the charity’s Be A Good Sport campaign and says anyone can do something sporty for charity.

“If I had one piece of advice to anyone, it would be to never say never,” said Stuart. “I’m in my 50s now so there are people doing the 10K much younger than me, but I just take it at my own pace and enjoy myself.

“When I did my first 10K I never dreamt I’d be where I am now. Now I’m a member of running clubs and I do different running events all over the place. It’s a great way to do something for a worthy cause.”

Participants can sign up to a range of sporting events including the Great Manchester Run 10K, the Manchester Marathon and Tour De Manc.

To find out about signing up to a Charity event and the Be A Good Sport campaign visit www.mftcharity.org.uk