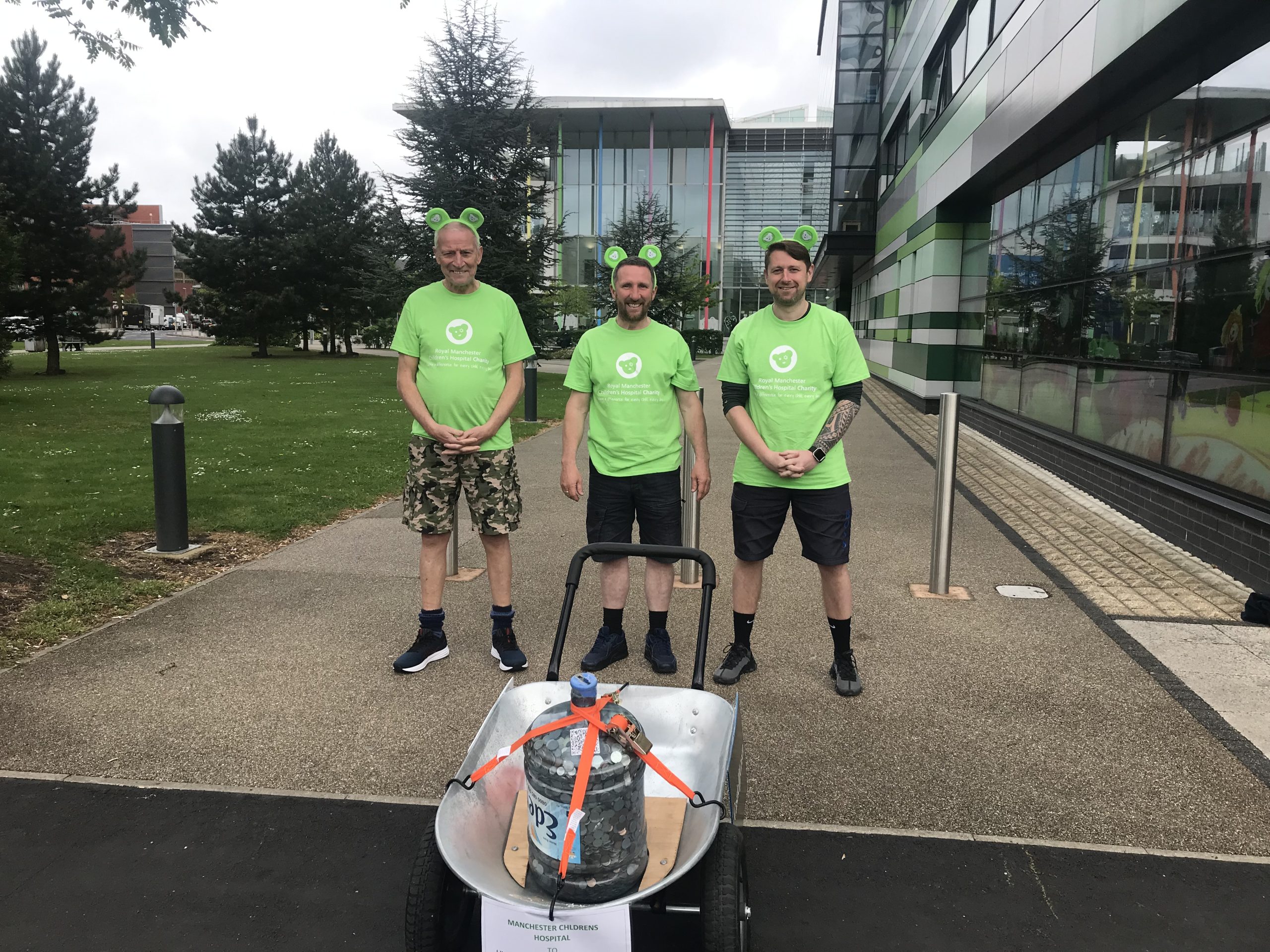 A dad who suffered the “worst day of his life” when his son was placed in a medically induced coma has completed an epic challenge walking between the two hospitals which treated him.

Chris Greer has pushed a 13 stone 3lb (83.9kg) tub of coins in a wheelbarrow from Royal Manchester Children’s Hospital all the way to Alder Hey Children’s Hospital in Liverpool. The massive coin collection started over 15 years ago, with Chris throwing in a few coins whenever he had some change.

The epic feat took him two days and saw Chris pushing the wheelbarrow 36 miles, spurred on by friends Phil Poulson and Karl Pendleton. Unfortunately a wheel broke just three miles short of the finish-line, but a replacement was found and Chris completed the grueling challenge on Friday evening. The adventure was worth it all to raise money for Royal Manchester Children’s Hospital Charity and Alder Hey Children’s Hospital Charity.

Chris said: “The second day was definitely tougher than the first, but I had two friends with me and the support we received along the way was incredible. People were tooting their car horns and putting money into the bottle. We couldn’t believe it when the wheel broke three miles from the finish. It was crazy and we were all laughing. I had a mate who was able to bring a spare wheelbarrow, so we did finish it, just not quite how we’d planned. It was such an amazing feeling to finish it on Friday night. We might all be achy, but we know it was for a worthy cause.”

The challenge was something very personal to Chris, who works as a subcontractor in the building trade, as his son Louis has been treated at both the children’s hospitals.

When Louis was just two, he had a convulsion in the back of the car and needed urgent medical treatment.

Chris said: “He hadn’t been well and was quite lethargic so my partner, Debbie McTaggart, decided to drive him to Alder Hey. They were on that journey when he started having a convulsion in the back of the car. Luckily some people rushed to help and an ambulance pulled over and he got to hospital pretty quick. When I arrived his eyes were just really wide staring at the ceiling and he was completely out of it. It was just the worst day I’ve ever had.

“They called us into a little room and I honestly thought they were going to tell us he was brain dead. I remember I was struggling to breathe and felt like I couldn’t get a full grasp of air. It was just awful.

“The doctors explained they wanted to put him into a medically-induced coma so they could really control him and monitor what was happening.

“He was in the coma for about four or five days and that was just a horrible time for us. I remember speaking to a family in the bed next to Louis and they had a baby who sadly would be in hospital all his life.

“It was on one of those days I came home from hospital and started putting coins in a large bottle – the sort you use for a water cooler. And I thought one day I’d do something with it.”

Thankfully Louis recovered from his coma and after a few more days he was allowed home, with no lasting medical conditions and not ill effects of his convulsion. However, he did suffer unrelated problems with his Achille’s tendons from a young age, and for those he was treated at Royal Manchester Children’s Hospital.

Louis’ mum Debbie said: “He was basically born with club feet – his feet were pointing inwards and he had lots of problems with his feet and ankles.

“He had five operations and total and was treated at Manchester’s old site at Pendlebury, then their new hospital in Oxford Road. He was finally discharged when he was 16, so we got to know his medical teams really well.

“They were all just fantastic.”

Although the money is still being counted, Chris and his friends have so far raised more than £9,000 on their fundraising page. The money in the water tub has been match-funded by sponsors Knowsley Domestics. Castle Green Homes have also donated £2,000.

Shannon Appleyard, a Relationship Officer for Royal Manchester Children’s Hospital Charity, said: “Chris and his friends Phil and Karl must be so proud of completing the walk. I hope they had a well-earned rest after it was all over.

“We’re so grateful to them for coming up with such a unique way of raising funds for two very special causes.”

Chris’ fundraising page can be found at https://www.justgiving.com/crowdfunding/15-yearbottle